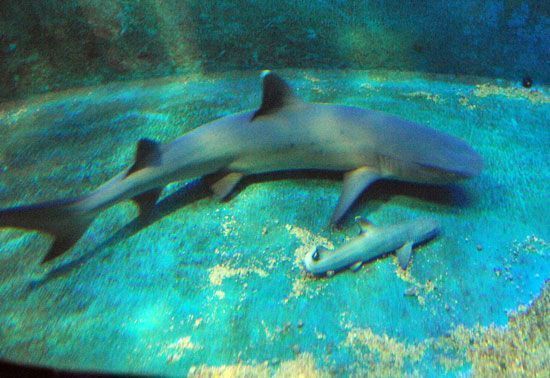 Due to the warmer waters brought on by this year’s El Niño, baby shark season has officially begun off the Southern California Coast and according to the biology experts at Cal State University, Long Beach’s (CSULB) Shark Lab, this means that more sharks will likely be sighted closer to shore as their pups are born.

Fewer large predators and an abundance of food, like stingrays and flatfish, draw sharks to the shallower waters of our shores, especially for birthing their young, who grow faster in warmer waters. Dr. Chris Lowe, professor and director of the CSULB Shark Lab, Dept. of Biological Sciences, CSULB, told the Long Beach Post that, while sharks are indeed fascinating and duplicitous creatures, humans can remain unharmed among them with the proper education.

Lowe explained, “We don’t know exactly where white sharks give birth. We know the babies show up in the spring through summer. It is very rare to see adult white sharks along our coastline; however, more are seen around the islands, such as Catalina and the Channel Islands. Maybe the females are giving birth to their pups offshore and then the pups swim in to shore to find food and warmer water.”

According to Lowe, the big marine predators that have been fished out of our shores over the past 50 years are coming back because marine conservationists have worked hard to clean the area, while coastal fisheries are being managed more thoughtfully.

“This means that for the first time in a very long time, we’re seeing large marine predators along our beaches,” he said. “These not only include sharks, but seals, sea lions and dolphins. Having a chance to see any of these marine animals in their natural environment is a very cool experience, but one we need to get used to.

He continued, “If you see a shark and it’s acting agitated, such as swimming fast and erratic, just keep your eyes on the shark and slowly swim back to shore. But these instances are rare.”

When asked if any sharks had recently been sighted due to baby shark season, Lowe said that the Shark Lab has detected four, young white sharks that have been tagged for the past three years. They apparently spent some time in Los Angeles and Long Beach harbors.

“One shark even went to Baja and came back into the Harbor the next year on its way back to Santa Monica Bay,” he said. “We’ve detected them swimming by the Huntington Beach, Hermosa, Manhattan Beach and Santa Monica piers.”

While it’s rare for white sharks to become stranded on the shore, baby salmon sharks, a close cousin to the white shark, will often strand themselves because of a bacteria that infects their brain and causes them to die, according to Lowe. So if you see a shark stranded ashore, don’t attempt to help them get back out to sea because one, it won’t prolong their life in any way and two, you’re setting yourself up for injury. Even as babies, these sharks have grown enough teeth to sink a few cuts into a helping hand.

Electrical shark repellants and recently, a few chemical repellents are being tested, said Lowe, but anyone’s best best is just to be as aware as possible, and of course, educated.

Lowe lamented, “Unfortunately, shark repellents are very hard to test and probably don’t work in all situations or on all species. I don’t think we’ll ever come up with a foolproof shark repellent, so the best bet is education. In other words, know the water you’re going in, know what animals may be there and what to do if you encounter them.”

He continued, “Being aware is the best way to keep yourself safe when going into the ocean. Being aware of riptides, marine life, pollution, boaters and other water hazards, and knowing what to do if you encounter any of those things will protect you better than any device and is far cheaper. The ocean is a wild place and we have to be willing to accept the risks when we enter it for recreation or for work.”