Making the Most of Your Day: 5 Tips for Increased Productivity 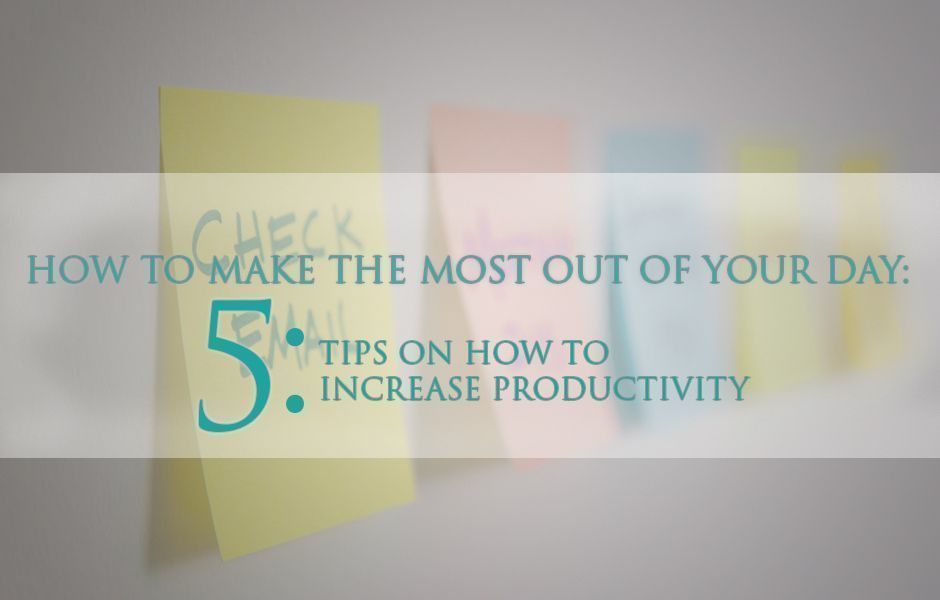 How to Make the Most Out of Your Day: 5 Tips on How to Increase Productivity.

Modern work-loads can be quite overwhelming. Working long hours supplemented by large amounts of caffeinated beverages is a combination that can make computer screens melt the back of our brains.  We can overwhelm ourselves with the illusion of multi-tasking. Our energy use doesn’t have to be so demanding, especially when we have a system to focus on tasks to maximize our short amount of time.

The guy on the 100 dollar bill had it right. Making a good attack plan by prioritizing tasks can be the difference between victory and defeat. Make sure to use lists, whether it’s an app like “Wunderlist” and “Trello”, on random post-it notes, or even a crumpled up napkin, writing things down enables you to view and stack your to-do situation mentally, so you can create an avalanche of productivity.

Trying to do too much can actually be counterproductive. Putting some projects aside so you can better focus on more important ones can cause a your other activities to cascade into place.  Take a moment to add a little note next to your items on your to-do list with an “estimated time to complete”. Sometimes it can help you prioritize so that you can either save multiple trips, or get your entire list finished a few days ahead of time.

Remember to focus on a few projects at a time rather than a whole picture. Also chop up bigger projects into, smaller, easier to finish tasks.

Don’t rob yourself of focus by getting interrupted by ringtones and Facebook status updates.  According to a study done by Microsoft, it can take the brain up to 15 minutes to re-focus after getting interrupted by a loud instant message, chatty coworker, or unexpected phone call.  By scheduling protected work time in certain sections of your day by shutting off your phone and letting people around you know that you should not be bothered, you can increase your productivity drastically by not having to spend time catching up with lost efficiency.

Known as the 80/20 rule or the Pareto Principle, 80% of our productivity comes from 20% of our tasks.  By prioritizing things such as call backs, firing off some non-essential emails, or doing some blog posting at the end of the day, it frees our time up during the early hours of our productivity to do more important tasks that gives us the most out of our increased productivity.

Sometimes we get a spark of inspiration when we least expect it.  Our brain likes to fill itself with anxious thoughts about several different projects. Write your thoughts down so you can later prioritize them to clean your brain’s inbox out by getting rid of thoughts that float around in your head throughout the day. Finish some smaller projects early while you have some spare time to then let your entire work week flow more smoothly.