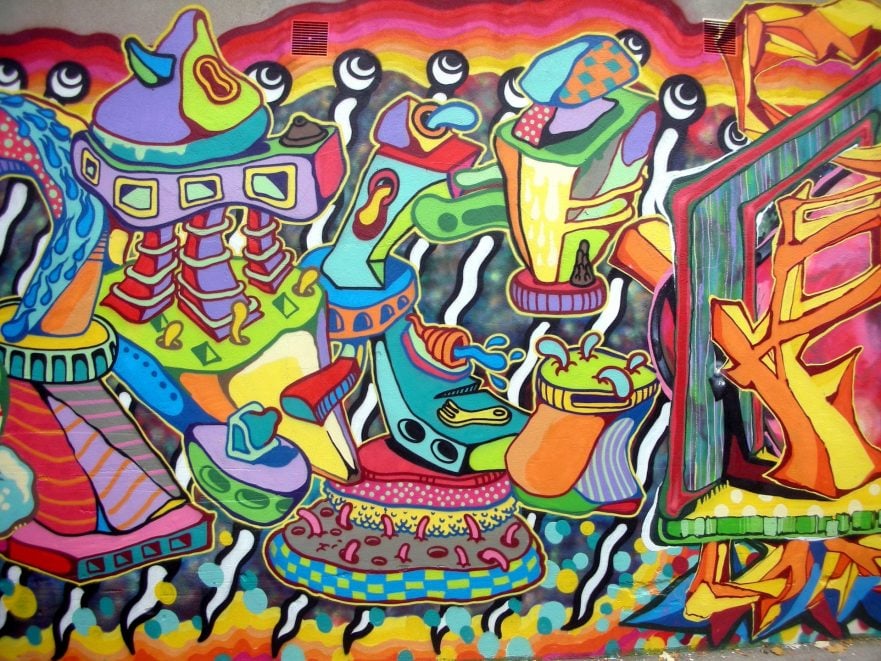 One of the many wonderful things about living in Long Beach is all the high-quality street art that is constantly popping up around the city. One of the reasons for this is the POW! WOW! art festival that heads our way every summer.

POW! WOW! is a worldwide series of street art events that started in 2010. Cities that have participated in the event include and have brought works of art to public spaces include Honolulu, Seoul, Washington DC, Taipei, and Tokyo.

Their mission is to bring art and culture to public spaces and beautifying every city they are in. Over the past three years that POW! WOW! has come to Long Beach and they have executed murals over 40 square miles throughout the city, stretching from South Street to Ocean Boulevard. All this amazing work has resulted in a walkable and bikeable art experience that’s totally unique to Long Beach.

Here are the artists who participated in the 2018 POW! WOW! art festival, and a map (scroll to the bottom of the page) so you can see these works in person, too.

Born in Frankfurt, Germany, Andres Von Chrzanowski (a.k.a. CASE) is a graffiti artist who creates pieces that combine photorealism along with surrealism. CASE mostly uses spray paint in his work and is known for his compositions that include overlaying hands.

Originally from Australia, street artist Fintan Magee creates socially and environmentally aware works. Many of his works are actually based off of personal experiences to as metaphors for global world issues. Some of his causes include the migrant crisis and climate change.

Jason Keam is an illustrator and animator with a background in storyboarding, animation, & visual effects. His work is very playful, vibrant, and lives in many places, including on the sides of buildings, canvas, print, and film.

Juan “Joon” Alvarado creates pieces, often inspired by living in Los Angeles, that captured moment of solace while being immersed in chaos. His colorful smoke bubbles express moments that you often wish could be articulated, but have the lack of words to express.

Juan Travieso Currently based out of New Jersey and New York and creates visually complex worlds suspended in a state of fracture. His work combines a realist painting technique with surreal juxtapositions, spatial splicing, bright palettes, and geometric abstraction.

Kamea Hadar grew up in the worlds of his Japanese/Korean mother and Israeli father. He began studying drawing and painting from a young age. Kamea’s work is based in traditional portraiture and it has evolved off of the canvas to large scale murals and installations.

Kaplan Bunce is an Artist, wood-maker and the 2015 President of the Kaua’i Powwow Council in Kauai.

Koz Dos is a Venezuelan graffiti artist who got his start in the Caracas hood. He is famous for his photorealistic and colorful portraits of people and frames, often using geometric patterns. He has developed an original style of figurative and representative graffiti, and he creates imaginary characters who harmonize the realistic images with triangle lines and dots.

Leon Keer is a world leading anamorphic street artist. His paintings reflect his thoughts, confronting the viewer with the diseased spirit of our times, visible decay counter-pointing a timeless longing for unspoiled beauty. His work encourages people to think about various environmental concerns and the livability of this world.

Lauren YS is a Los Angeles-based artist whose work is influenced by multiple stages of focus, both geographically and in practice. With dynamic bouts in academics, literature and writing, teaching, illustration, and animation leading up to her arrival in the urban art sphere, the influences of these phases of her own career add up to a robust style of murals and fine art.

Nuria Ortiz, who is known in the art world as Ms. Yellow, is a local Long Beach artist who is featured in the 2018 Pow! Wow! art festival. She is known for her colorful and enchanting work in mediums including paint, pen, brush, jewelry, sculpting, or spray paint. Art helps her articulate her feelings without using words.

Los Angeles based artist Francisco Reyes, Jr. is better known by his alias Never Made. For over a decade, Francisco has been pursuing his passion in Graphic Design. Never Made parlays his vision through a wide range of items, including, but not limited to: limited edition screen prints, t-shirts, and sculptures.

Originally from Phoenix, Arizona, Noelle is no stranger to Pow! Wow! Long Beach. She worked with the festival since 2015 as a volunteer and has helped many of the greats like Aaron De La Cruz, Fafi, HTZK, and more over the years. In her own work, Noelle focuses on human vulnerability and is inspired by emotions intersecting in everyday life.

Shantell Martin sees her signature black and white work as a way to create connections between education, design, philosophy, and technology. It’s the glue in an increasingly interdisciplinary world. Her artwork has appeared in the Brooklyn Museum, Museum of the Contemporary African Diaspora, Bata Show Museum and the prestigious Albright Knox Gallery in Buffalo, New York.

Spenser Little is a self-taught artist who has been bending wire for the last 15 years, allowing his creativity to morph into images that range from simple wordplay to complex portraits. Some works contain moving components and multiple wires, but most of his pieces are formed from one continuous piece of wire that is bent and molded to Little’s will.

National Forest is a design firm and creative consultancy that applies itself as both innovators, thinkers, and visual engineers. They are dedicated to making the world a better place and feel compelled to share the fun and excitement they have been fortunate enough to experience.

Sun Draws (Shane Sun) is another Long Beach local muralist who participated in Pow! Wow! this year. Sun drew inspiration for his mural from the idea that in order to live, the human race relies on trust and cooperation with other people doing amazing things together. His wants his viewers to ask “what happens when our palms come together?”

A classically trained illustrator, Sydney James’ career began in 2001, after earning her BFA from the College of Creative Studies, as an Art Director for Global Hue Advertising Agency in Detroit. Her work has been exhibited at the Charles H. Wright Museum of African American History, Inner State Gallery, The Red Bull House of Art, Gentlemen Jack’s Art, Beats and Lyrics, and numerous venues throughout the United States.

Tatiana Velazquez moved to Long Beach a couple years ago, joining the local art community. She’s been doing street art and murals for around six years, and was honored to create a mural for Pow! Wow! 2018. The inspiration behind her art came from a dream she had years ago of a three-eyed being. Through Pow Wow, Velazquez was able to share her art and vision with not only other artists but with the community as well.