Does A Possible Recession Mean A Housing Crash?

With most Americans under orders to shelter in place and unemployment at record high rates, many experts or now warning that the American economy is heading toward a recession, if we’re not in one already.

Many people assume that with a recession will come another housing crash. And the fears over a housing crash combined with fears about coronavirus have sidelined many potential home buyers and sellers.

What is a recession?

According to the National Bureau of Economic Research, a recession is defined as “a signicant decline in economic actiity spread across the economy, lasting more than a few months, normally visible in real GDP, real income, employment, industrial production and wholesale-retail sales.”

COVID-19 hit the pause button on the American in mid-March and the recent news that most of us will be sheltering in place for quite a while longer has kept it paused. Goldman Sachs, JP Morgan, and Morgan Stanley are all saying the expect the economy to take a deep dive in the second quarter of this year. While we might not technically be in a recession yet, most economists believe that history will reflect we were in one from April through at least June.

Is another housing crash going to happen?

During the Great Recession of 2006 to 2009, the housing market also crashed, and that has many people fearful that we’ll experience another housing market crash. Yet, the past shows that most recessions don’t actually have an adverse impact on home values.

Here’s what Doug Brien, CEO of Mynd Property Management had to say: “With the exception of two recessions, the Great Recession from 2007-2009 and the Gulf War recession, from 1990 to 1991, no other recessions have impacted the U.S. Housing market, according to Freddie Mac Home Price Index data collected from 1975 to 2018.”

In a study of the last five recessions, CoreLogic reached the same conclusion. Here’s a graph of their findings: 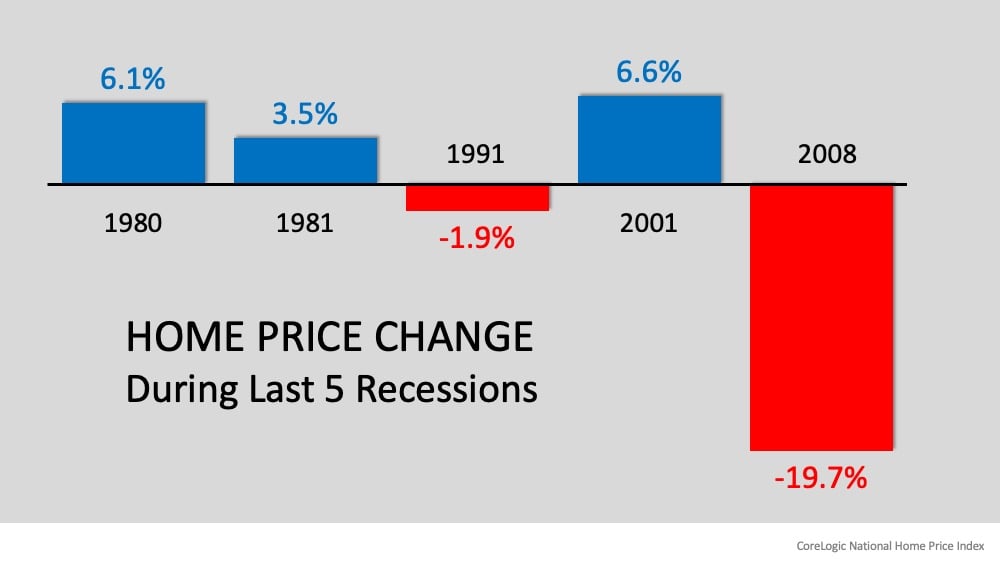 What are experts saying this time around?

Here’s what three economic leaders have to say about the housing connection to this recession:

Robert Dietz, Chief Economist with NAHB:  “The housing sector enters this recession underbuilt rather than overbuilt … That means as the economy rebounds — which it will at some stage — housing is set to help lead the way out.”

If we’re not in a recession yet, we’re about to be in one. This time however, housing will be the sector that leads the economic recovery.

What if you needed to sell your home now? What can you do? Read our blog post here.