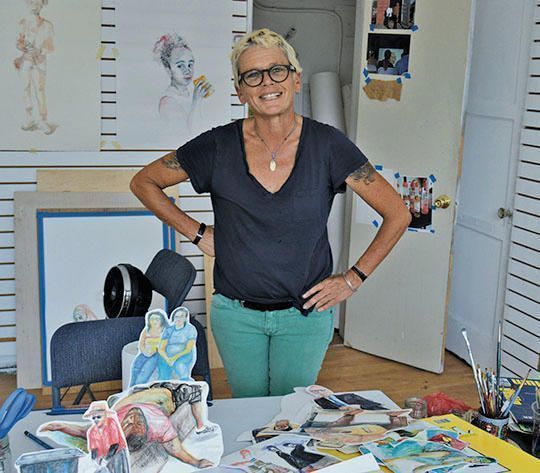 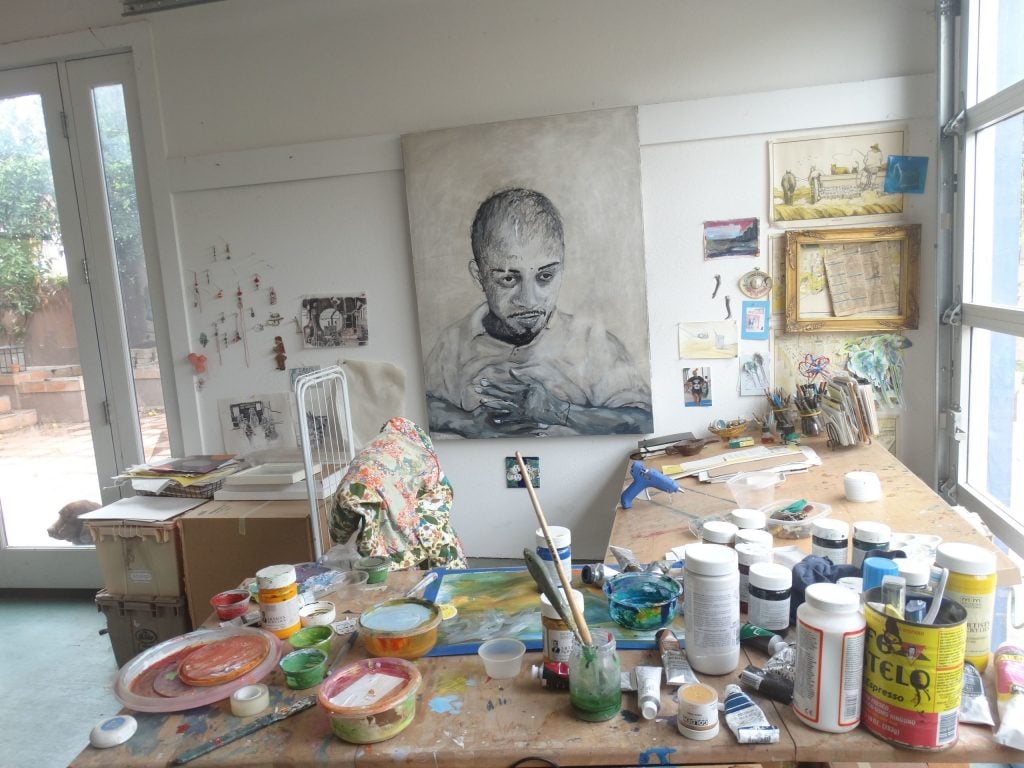 Local Artist and Activist who gives back to her community

Born and raised in Australia, Angela Willcocks currently calls the historic district of Belmont Heights home. Her house is more than thoughtfully decorated rooms. Her living spaces, studio, and gallery are one with her day to day life. She graciously opened her home and humbly shared her art. Or rather I should say, let her art speak to me. 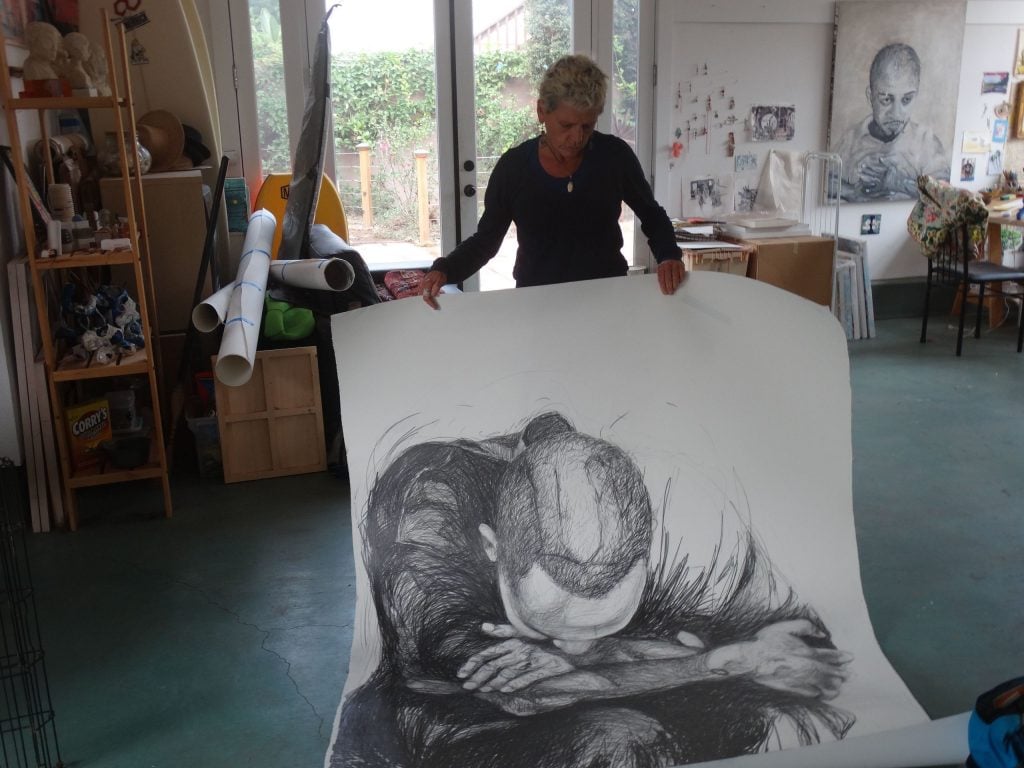 Her current art project is funded by ALot from the Long Beach Art Council. Willcocks rented a storefront at 6021 Atlantic Ave. in North Long Beach, and transformed it into an art studio. She welcomes her neighbors to visit the space. They can view art, take free art lessons, and even receive free art supplies. The store front in now a safe place for people to gather, and creating art allows them to communicate with one another. She took an implicated space and positively transformed it. 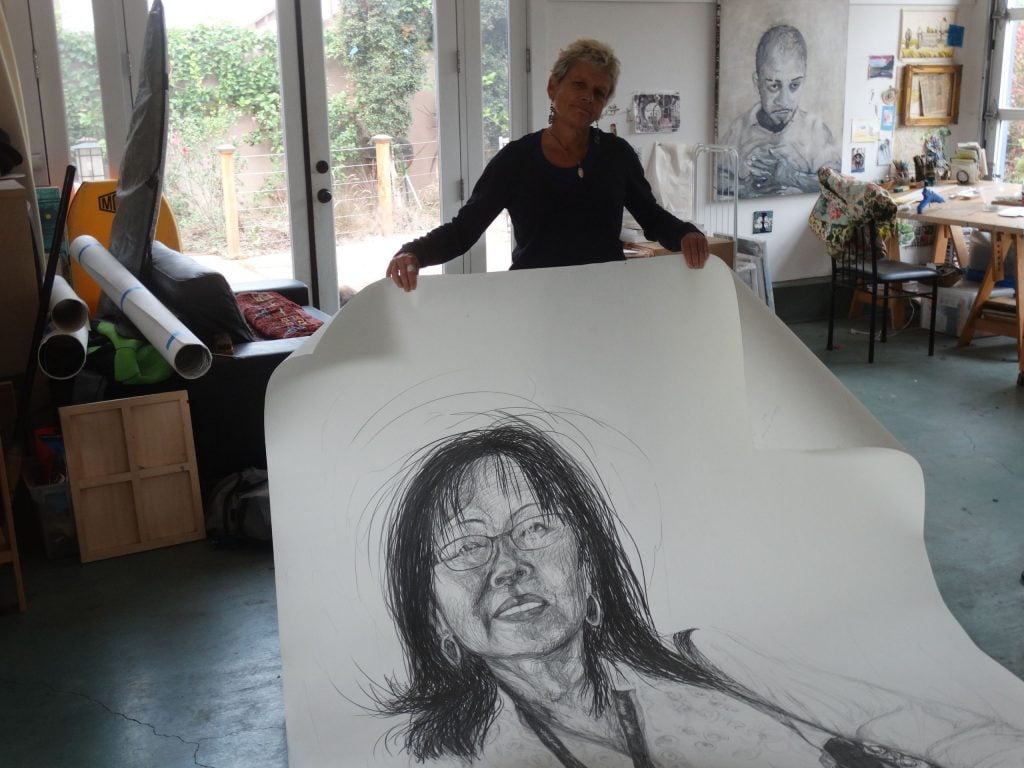 This North Long Beach community welcomes her and the art studio. They love it when she paints their portraits. Not only does she paint, but she records their life stories. Then these recordings are played in barbershops throughout the neighborhood.  When asked why a barber shop? She said, “This community does not have galleries or museums, but they have barbershops.”  The barber shops have become an archive of art for the people of this neighborhood. The lease on her store front is ending soon, and she hopes to raise money with a Kickstarter Fund. More details about the Kickstarter project can be found starting in November on her website, www.awillcocks.com. 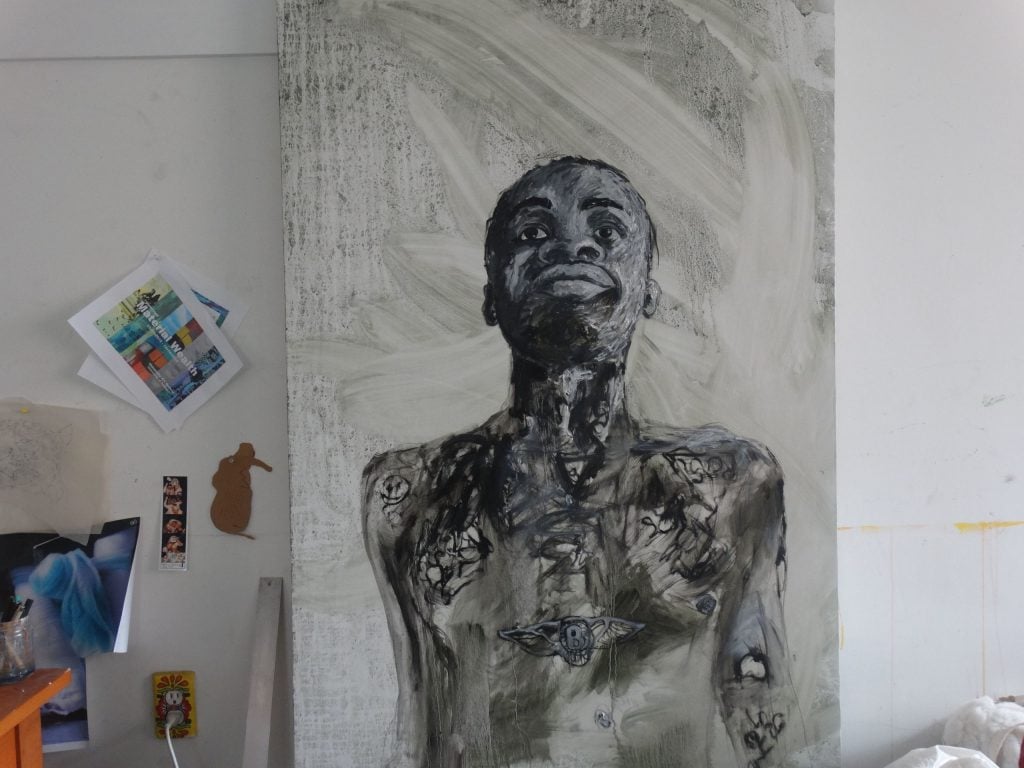 Some of the people she has painted for her “Barbershop Project” hang on the walls of her converted garage / working studio. The portraits are of gang members. The facial expressions and emotion-filled eyes instantly transports the viewer into a world of pain and loss. Yet, Angela validates and gives purpose to each person she draws, and the stories she records will become their legacy. Literally giving her art a voice. 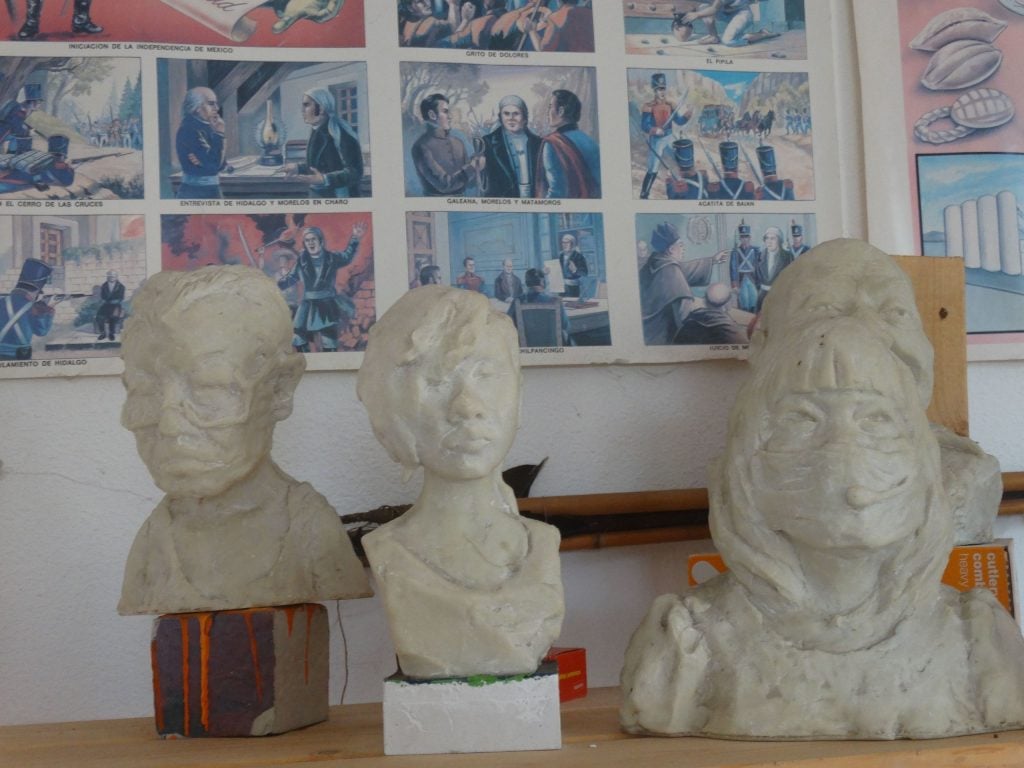 Interesting statues sit on shelves along the south wall of her studio. These fiberglass statues are of Chinese migrant workers. China is known for statues throughout its country that pay homage to their famous rulers. Willcocks created these detailed statues to pay homage to the people that help fuel China’s economy. Again, it was her process of creating art that is so moving and powerful, She drew line drawings of these workers in their homeland of Beijing, China on paper coffee cups. The same cups that are sold to American coffee houses. She then hired a Chinese artist to sculpt clay busts of the drawings. The busts where then cast into fiberglass sculptures and brought back to the United States. The sculptures truly reflect Chinese made products sold in America. 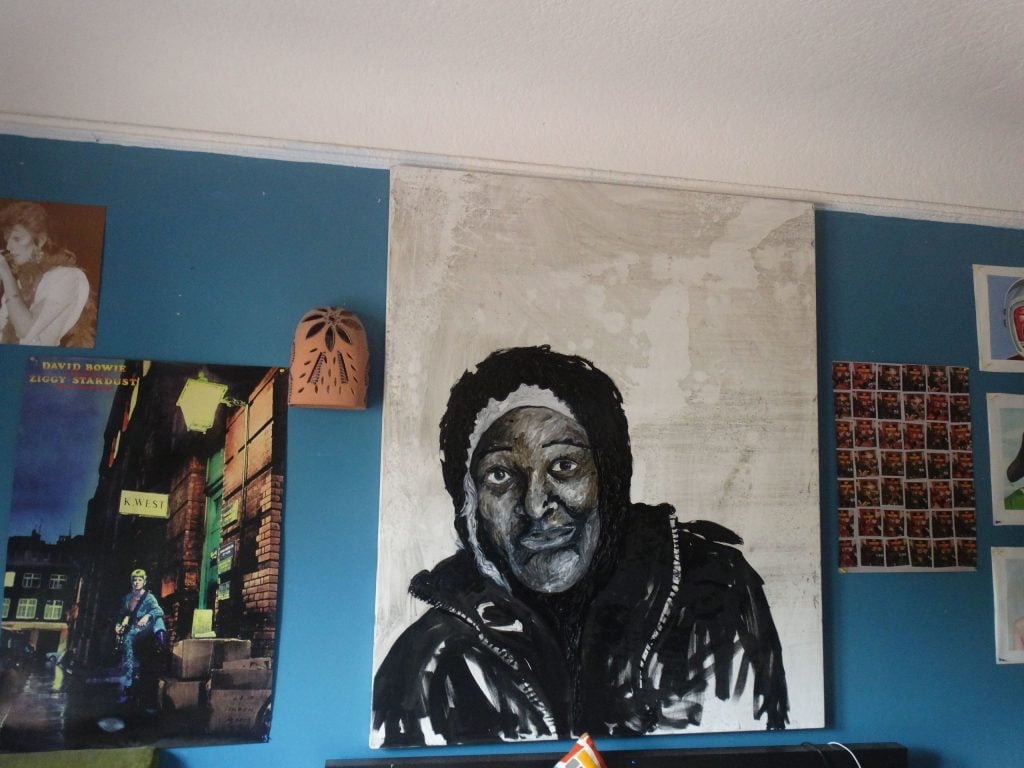 Additional art can be found inside her home. Next to the studio is an enchanted garden that leads to a downstairs room. This space is home to twelve foot painting of an African American woman. The woman in the painting looks happy and peaceful. One would never know she is homeless because Angela painted her with such empathy and humanity. 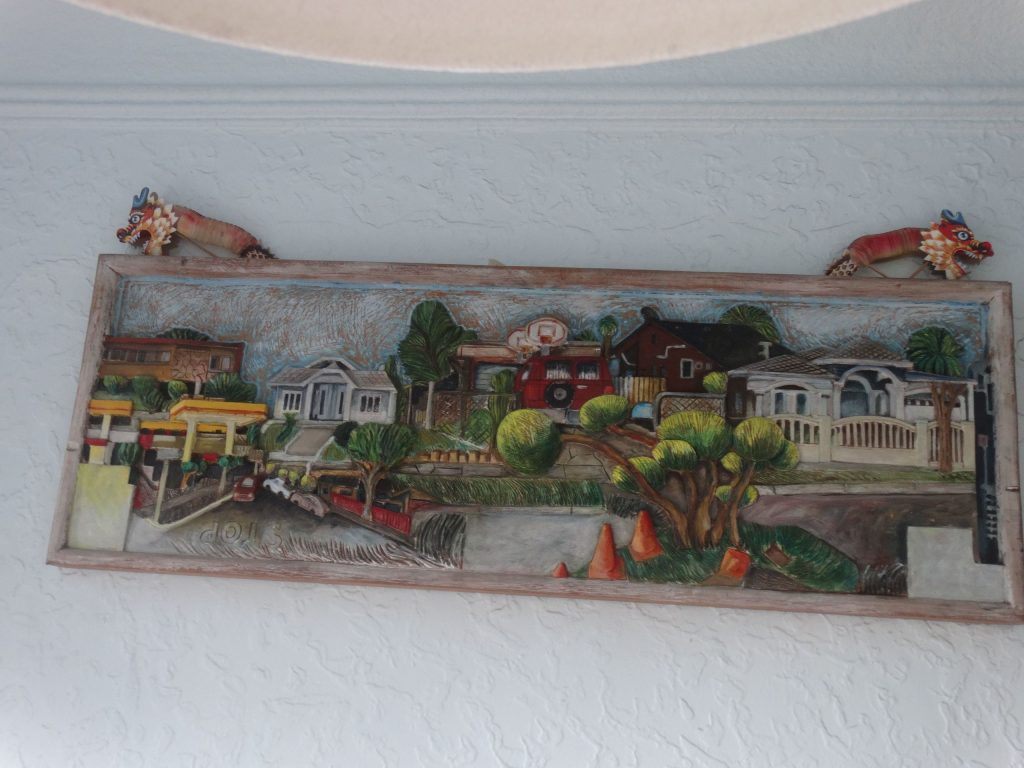 Walking through her completely restored Spanish-style home feels like a private tour in an international art gallery. Her breakfast room wall is a canvas for one of her three dimensional wood carvings. She began this project by photographing urban neighborhoods in China Town, Mexico, and Southern California. She digitally merged and layered the photos creating a single printed image. She then took the prints across the California border into Tijuana where she had the prints carved into wood. Then crossed back into California where she painted them. Now, the carvings are pleasing to the eye, and ready to be sold. However, she did not make any money. Instead, she documented her artistic process and captured the essence of border crossing as an immigrant, business woman, and at the end of the day an artist without borders 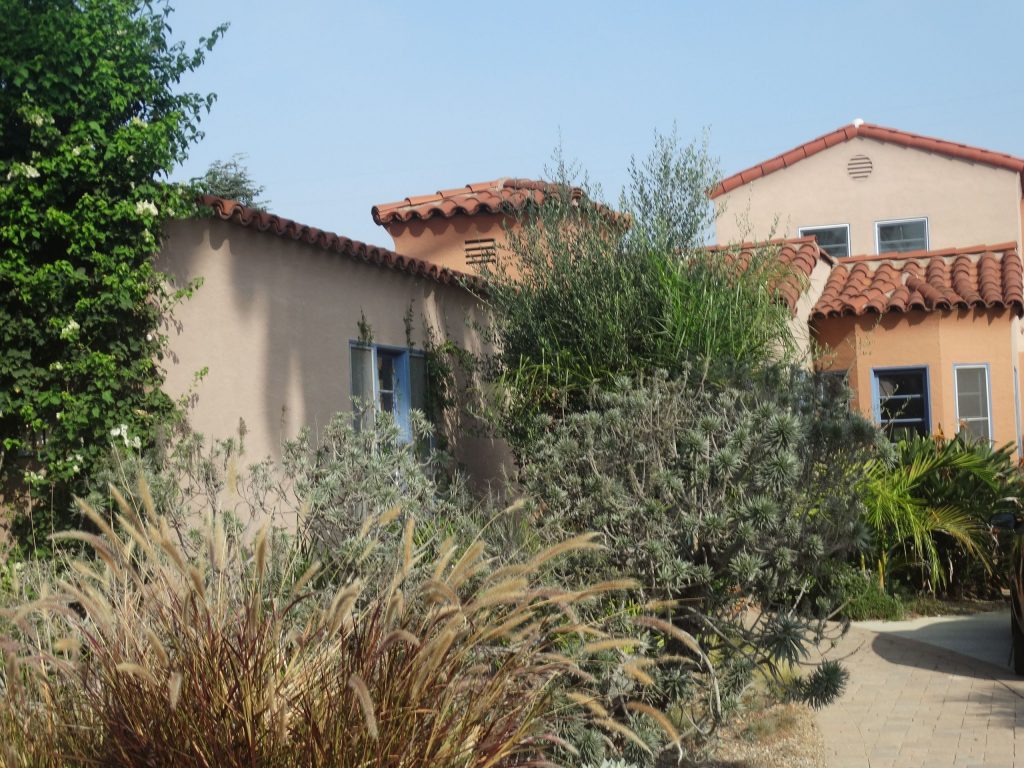 Even though she travels to enchanting places around the world to work on projects, she calls Long Beach Home. When asked why Long Beach? She looks outside at her beautiful garden, and points to the bright blue sky. She says, “This is why.” She loves that Long Beach is a big city down by the beach. She also appreciates that it is affordable and accessible. When asked if she would move back to Australia, she said, “Why? When I have this, Long Beach.” 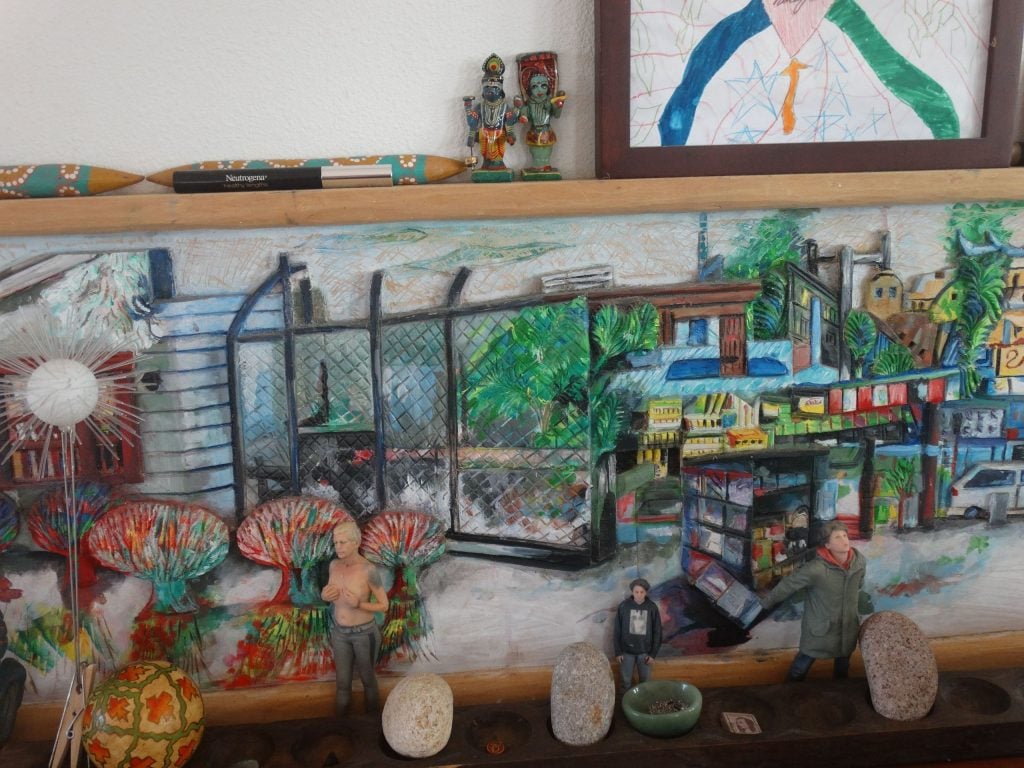 Willcocks is a talented and gifted visual artist. She has exhibited both nationally and internationally as a digital media artist, sculptor, and painter. And, likes to describe herself as a guerilla artist, projecting and transmitting work in urban landscapes. She is currently teaching art at the University of Redlands and Long Beach Community College. When not teaching or creating art, Willcocks enjoys spending time with her four children and two Labrador Retrievers.

This is one of an occasional series of profiles of clients of The Shannon Jones Team. If you’d like to be considered for a profile or you have a suggestion for a business or community member who we should profile, please fill out the contact form below.