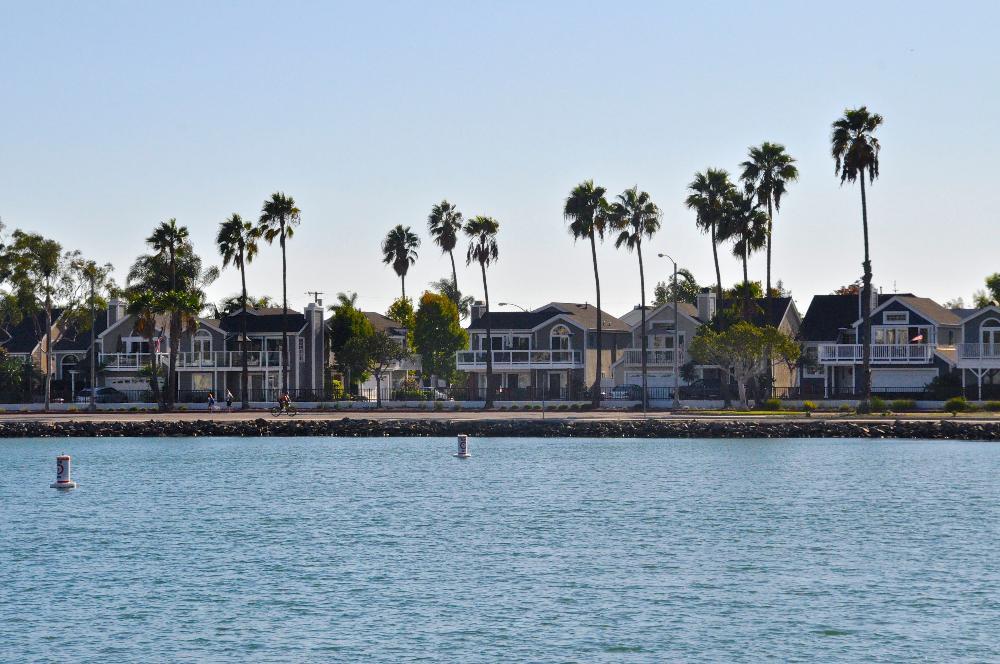 Is Now the Time to Buy or Sell a Home in Long Beach?

The Long Beach real estate market is sizzling this spring, with prices rising and inventory shrinking.

Not surprisingly, homes are selling faster and closer to list price than they were a year ago. The average days on market for homes sold in April was 50, down 25.4% from the 67 days it took to sell a home in April 2015. The percentage of original list price received was 98.8%, which is up 1.2% from a year ago. 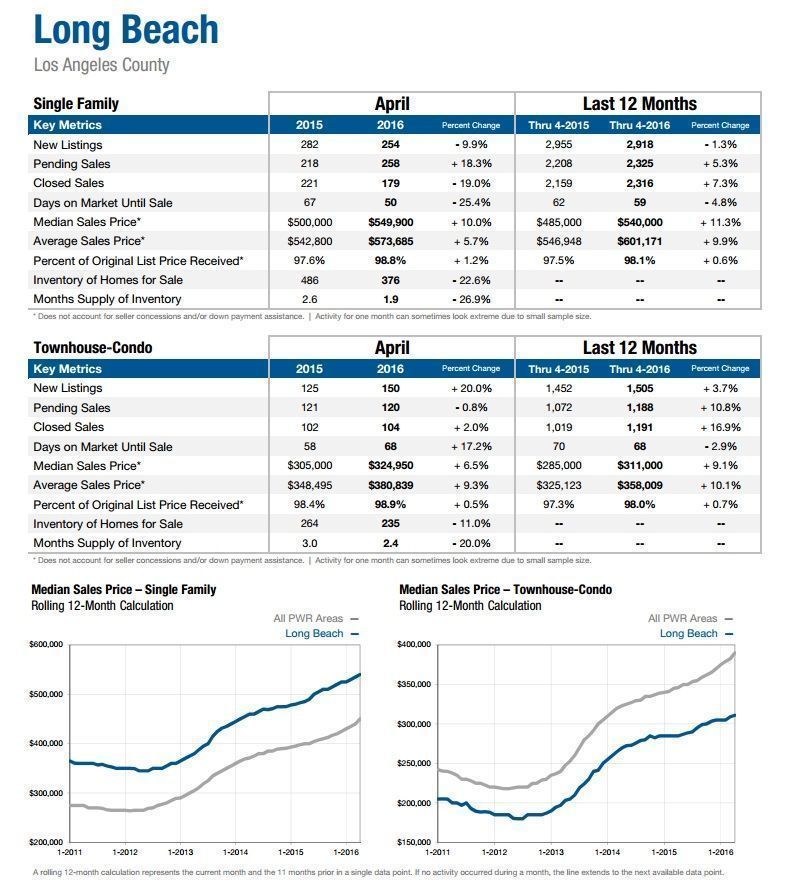 Some neighborhoods in Long Beach have shown greater price appreciation and a tighter supply than others. Here’s a look at the market by zip code.

The median sales price for single family homes in 90802 showed a decline year over year. However, the median price for condos in 90802, which encompasses downtown Long Beach, increased 16.6% between April 2015 and April 2016. 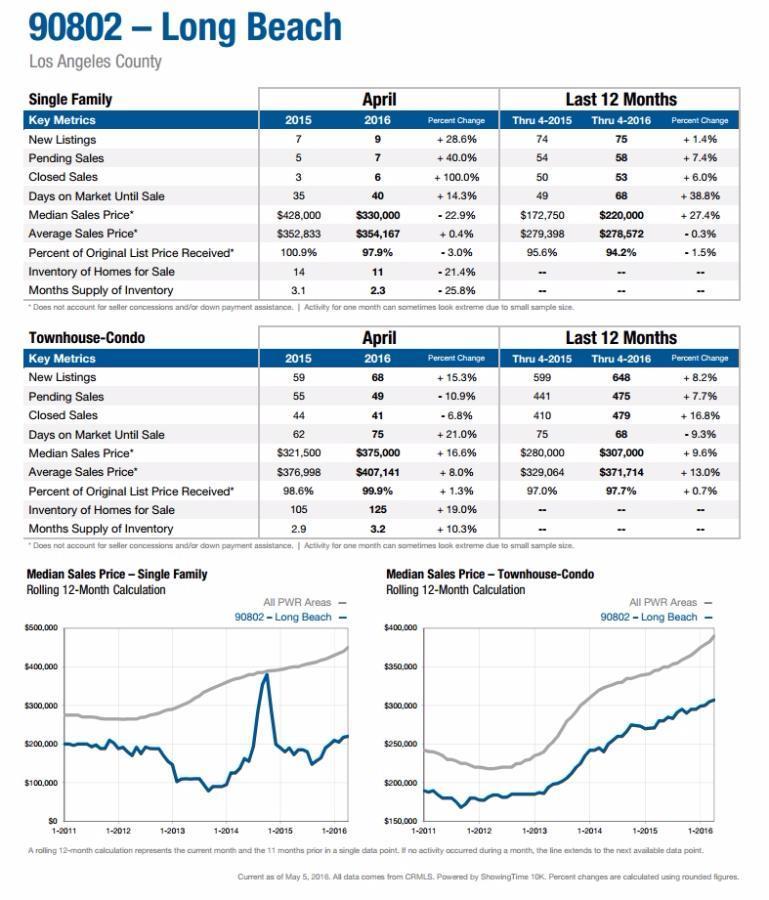 The 90803 area of Long Beach, which includes Naples, Belmont Shore, Belmont Park and parts of Belmont Heights, has one of the highest inventories of homes for sale in Long Beach and has had a slower rate of appreciation than the city as a whole. As of April 2016, the median home price was $870,000, up 5.1% from the prior April and there was a 4.2 month supply of inventory, up 20% from a year ago. 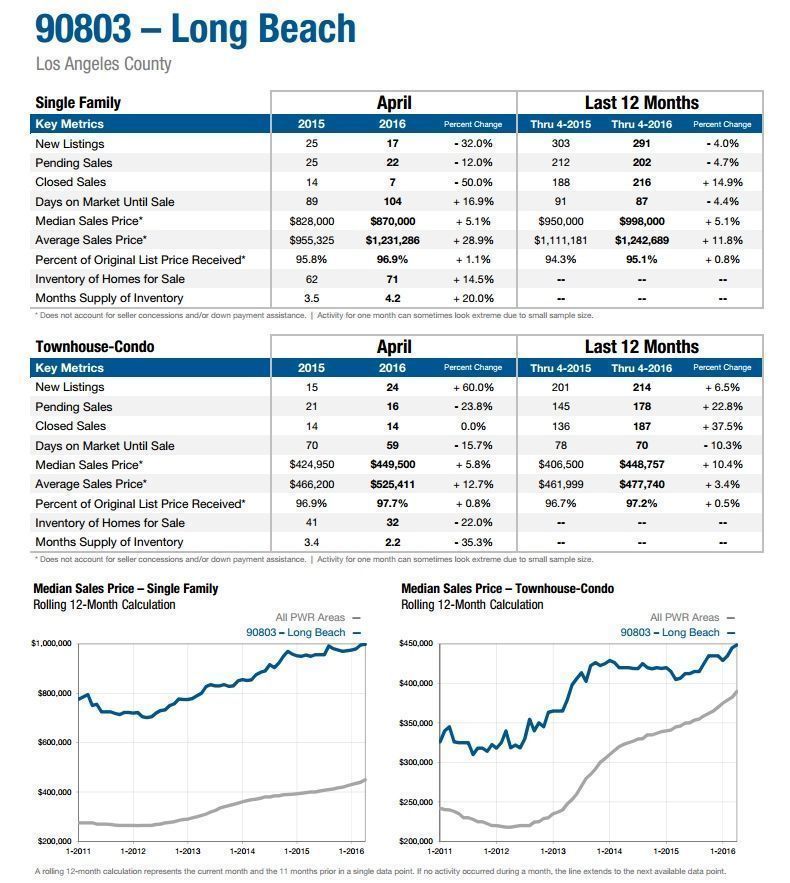 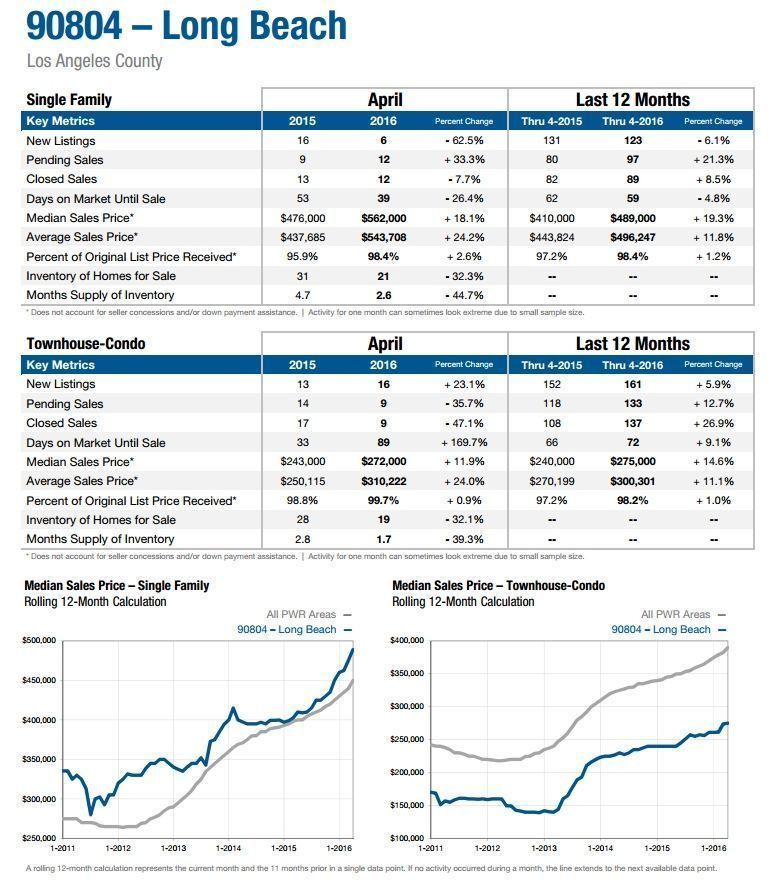 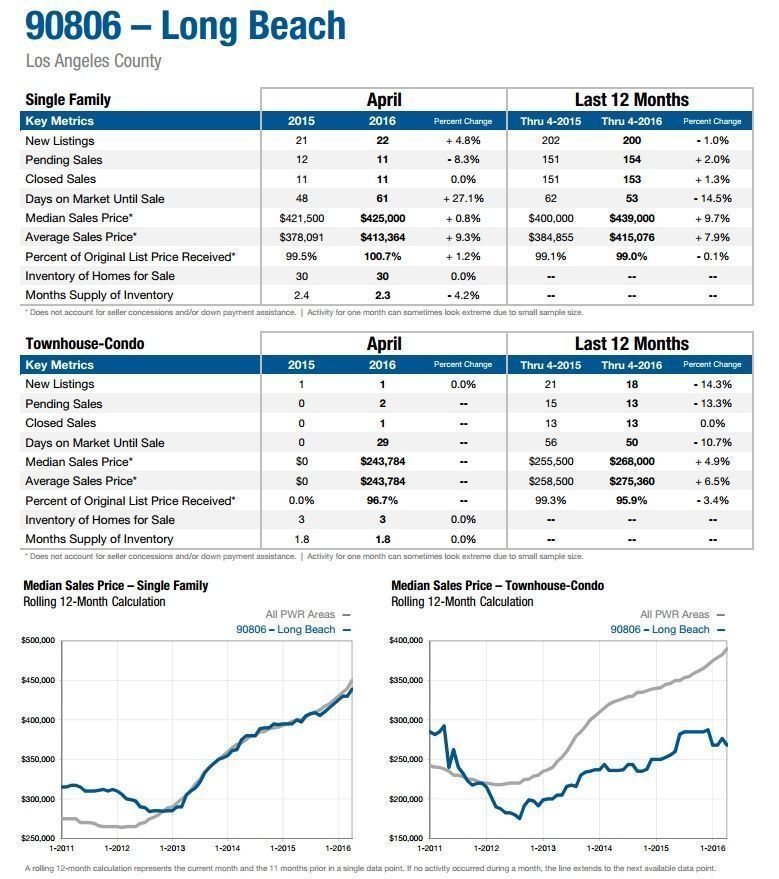 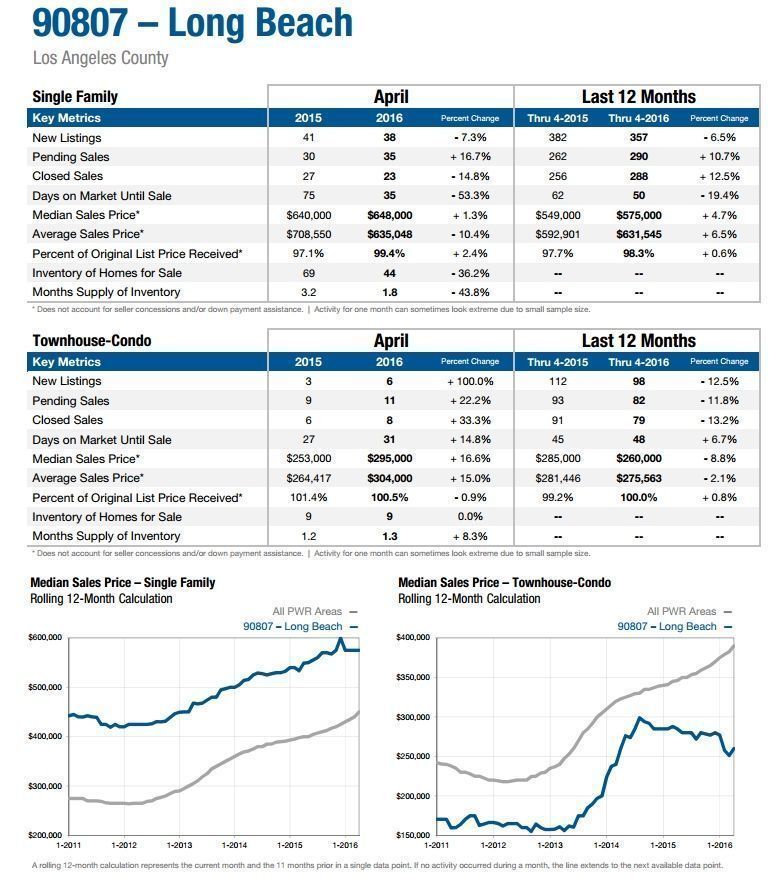 The median home price in 90808 as of April 2016 was $595,000, a 7.7% from the previous April. Meanwhile, closed sales, new listings, and the supply of homes for sale all declined. The 90808 area, which includes Lakewood Village, Carson Park, the Ranchos, the Plaza, and South of Conant, is extremely hot and many buyers are seeking homes in this area right now, but the selection of homes is very limited. 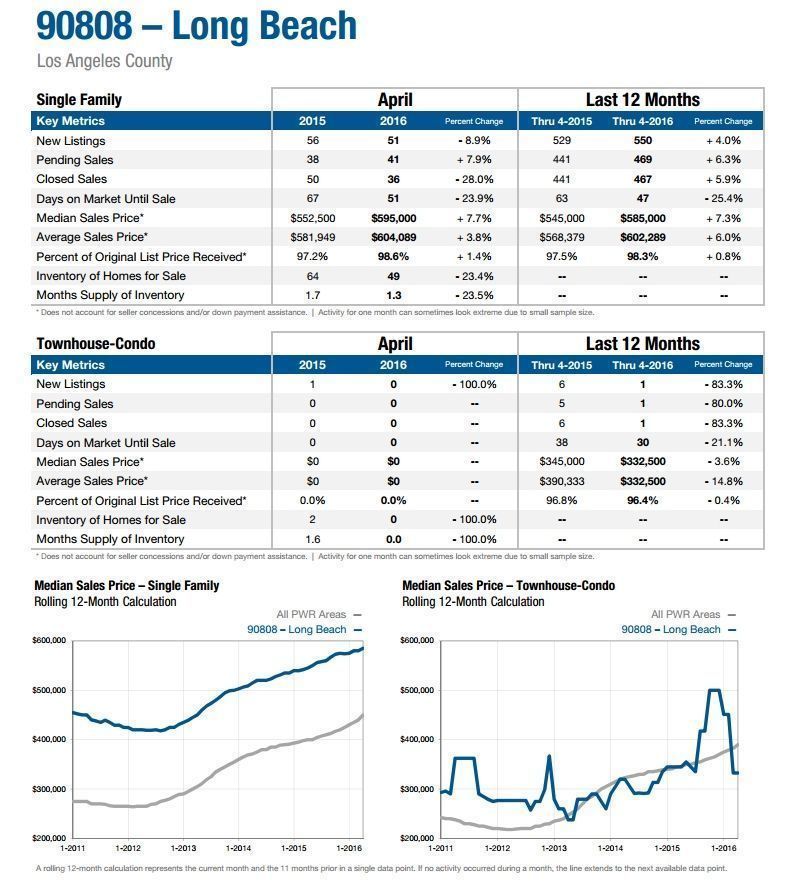 The median home price in 90814 in April 2016 was $835,000, one of the higher median prices in Long Beach, but slightly down from the median price last April. And although much of the city is experiencing a very low inventory, 90814 has a supply that is relatively constant year over year. The 90814 area includes Rose Park South, Carroll Park, Bluff Heights, and part of Belmont Heights neighborhoods. 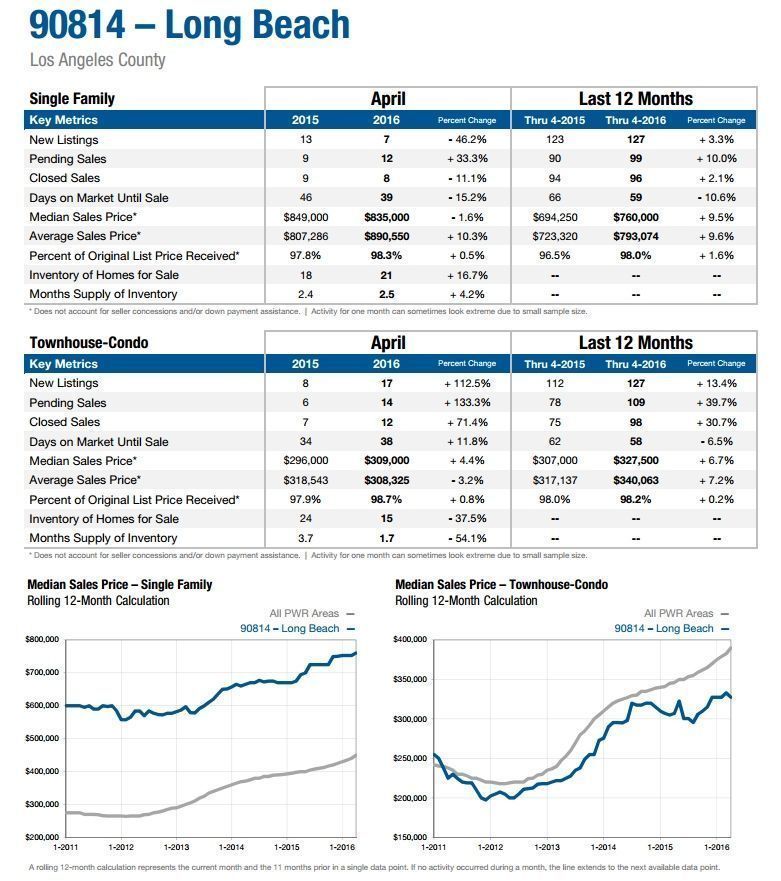 The median home price in 90815 increased 9.4% between April 2015 and April 2016, rising to $645,250. Meanwhile, the inventory of homes for sale fell from a 1.8 month supply to a 1.4 month supply during the same time period. The 90815 area includes some of the city’s most popular eastside neighborhoods, including Los Altos, Park Estates, and La Marina Estates. 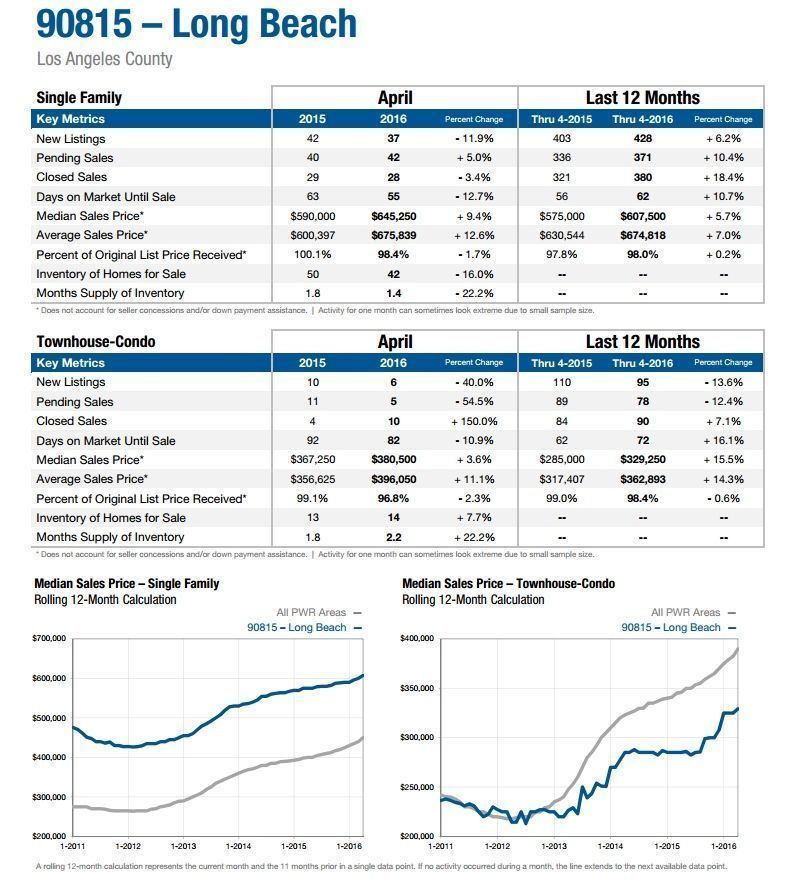 If you are considering selling or buying a home, this could be a great time to explore possibilities. Especially if you are planning to buy and sell, the combination of interest rates, pricing, and inventory this spring and summer could help make the transition smoother than it might be in another market. If you’d like a customized CMA (Comparative Market Analysis) to find out the value of your home, please fill out the form below and we’ll be happy to prepare that for you, whether you’re thinking of selling or simply curious.