The Long Beach Breakwater: Why It’s There and Where It’s Going 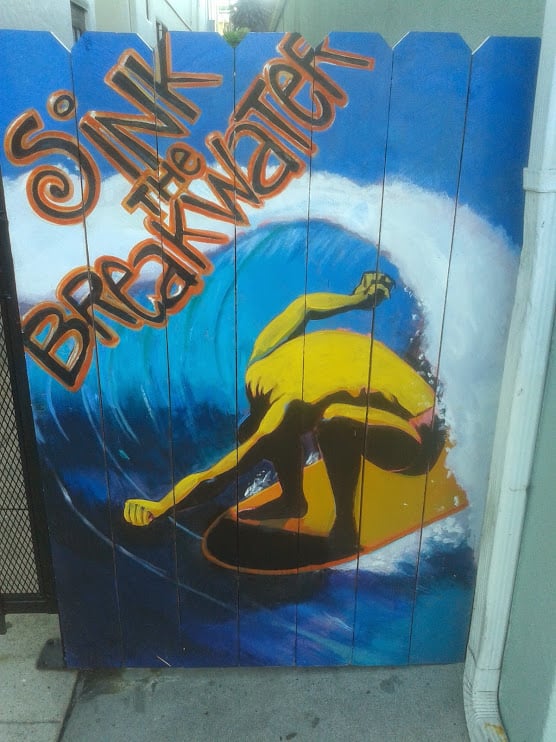 While Long Beach has a beautiful beachfront bike and walk paths, a fun pier, and one of the best dog beaches in the area, the one thing we don’t have are waves. And without waves, there is no surf scene here either. The reason for this is that a breakwater was installed between 1941 and 1949 when the Navy moved into the port of Long Beach and used the breakwater for military purposes.

Constructed in the 1940s in the midst of World War II, the Long Beach breakwater was built by the U.S. Navy as part of a deep water port project. It also served as a barrier and deterrent to enemy submarines.  While the navy shipyard was active throughout the 1940s and 1950s, it was only used periodically in the following years for special projects before closing in 1997. With no shipyard to shelter or defend, the necessity of the breakwater has been in question and is currently being studied.

Prior to the breakwater, Long Beach was actually known as the “Waikiki of Southern California.” We had plenty of waves for surfers to enjoy and even held a large surfing contest in 1939. This is the part of Long Beach culture that The Surfrider Foundation  chapter is trying to restore.

The group has been working for 22 years to get the breakwaters removed in order to improve natural ocean circulation and help clean up the trash and debris that washes ashore from the Los Angeles River. There is also a potential for a major financial benefit to the city of Long Beach if surf culture came back. Some estimates put the estimate of revenue at $52 million annually in local spending and economic activity, and about $7 million from taxes and parking fees as a result of removing the breakwater.

Restoring Long Beach’s aquatic ecosystem is a primary goal of the movement to remove the breakwater.  Returning natural circulation into the waters of Long Beach Harbor would help improve water quality along the entire shoreline. The breakwater currently blocks ocean currents that would help remove the pollutants from the Los Angeles River.

Pristine sands, clean water, and greater notoriety as an in-demand beachfront community would most likely lead to higher property values. Currently Long Beach coastal real estate values are lower than those of similar nearby beach towns. The Surfrider Foundation projects that the combination of clean water and active surf breaks will help elevate Long Beach home values if the breakwater is removed.

The Army Corps of Engineers’ Findings

The Surfrider Foundation was feeling confident when the Army Corps of Engineers came in to start studying the project, but their findings were not at all what the Surfrider Foundation was hoping for. The Corp’s tentative proposal to improve the coastline and marine wildlife habitat in the San Pedro bay actually does not include any modification to the breakwater. A plan to demolish at least some of the 2.5-mile rock structure would be considered, however.

The fact that there was even a possibility of none of the breakwater being removed in the proposed plans was a huge blow to the Surfrider Foundation. It was their advocacy that originally lead to the joint corps and city effort. The fact that they are considering zero breakwater removal is seen as a betrayal.

The Army Corps explained, however, that their ultimate goal is restoring the marine habitat. Ed De Mesa, chief of planning for the Los Angeles district of the Army Corps said “We’re going through the process right now to determine whether breakwater modification would contribute to aquatic restoration. Ultimately, the plan is something that we can support together.”

The Future of Our Beaches

Now activists and residents alike are basically just waiting to hear what the Army Corps has planned for the coast. They are expecting to decide on a “Tentatively Selected Plan” in September and release the details to the public in November so the community can weigh in with their ideas and opinions before they come to a final decision.

One concern if it ends up that the breakwater is removed are the homes on the Long Beach peninsula at the south end of the coast. These homes would be much more susceptible to flooding without the breakwater. Surfrider does understand this risk and has pointed out that the beaches in that area would need to be modified to protect said homes.

Regardless of what the Surfrider Foundation has seen as a betrayal and huge setback, there are no signs that they are giving up the fight to see the breakwaters removed and for surf culture to make a return to Long Beach. We will all be eagerly awaiting the findings and proposed plan from the Army Corps of Engineers.